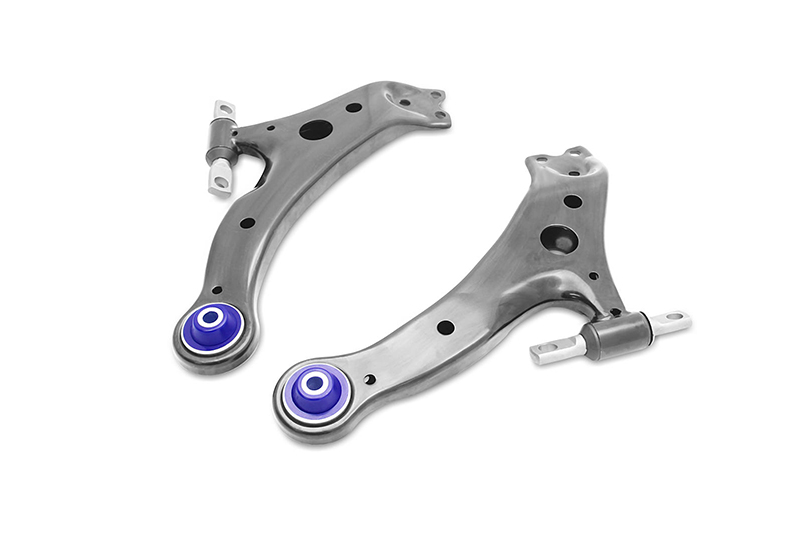 SuperPro are pleased to release a full Front Lower Control Arm Kit for the Toyota Camry,  Aurion 40 and 50 Series vehicles.

By replacing the rear position O.E voided rubber vertical bush with the unique SuperPro bush vastly improves the handling, braking, dynamic wheel alignment and tyre life, making these arm kits the only choice for the repair and repair upgrade for these vehicles.

Made from O.E quality steel,  with a SuperPro Vertical Pivot bushing and the front crossbar bushing maintaining a similar material to O.E to help absorb unwanted noise transfer along the arm and being super easy to fit, why fit anything else!

SuperPro control arm kits offer the ideal repair and repair upgrade option. The common failure point in the arm as fitted to these vehicles is the vertical pivot bushing in the rear position. This bushing controls braking stability and wheel alignment.

Installing the SuperPro spherical style bushing gives handling and braking enhancements. The front crossbar bushing maintains a similar material to O.E to help absorb unwanted noise transfer along the arm. With the superior SuperPro rear position bushing, the wear and side twist load on the front position is reduced leading to increased durability.

SuperPro Tip
Designed and packaged to be replaced as a pair. SuperPro maintains it is critical for a pair to installed to any application at the same time to avoid any detrimental handling and braking characteristics from a mismatch of bushing material.

Find where you can buy these arms!